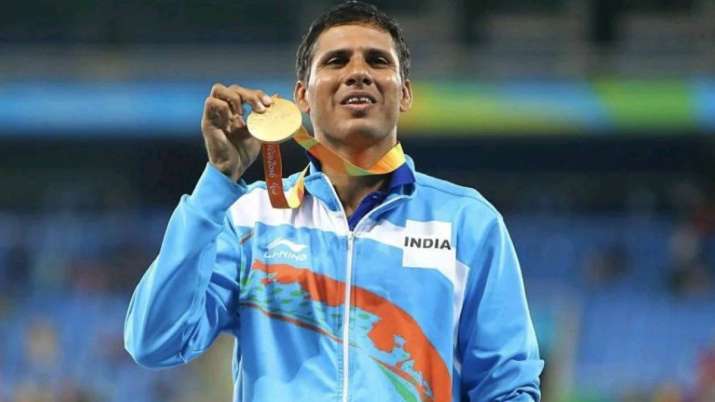 New Delhi. Sports Minister Anurag Thakur and the Paralympic Committee of India on Thursday formally bid farewell to the 54-member Indian team for the upcoming Tokyo Paralympic Games. India will compete in nine events of the Paralympic Games, which will run from August 24 to September 5. The team has players like Devendra Jhajharia (F-46 javelin throw), Mariyappan Thangavelu (T-63 high jump) and world champion Sandeep Choudhary (F-64 javelin throw) who are among the medal contenders. With this the country is expected to perform at its best in the Paralympic Games this time. Jhajharia is trying for her third Paralympic gold medal.

He has won the gold medal in 2004 and 2016. Mariyappan, who won the gold medal in the previous edition of Rio, will be the flag bearer of the Indian contingent during the opening ceremony on August 24. The players leaving for Tokyo become part of the virtual event as they are in a tough ‘bio-bubble’. Thakur said in the video message, “The ambition and self-confidence of our para athletes inspire 1.3 billion Indians. Even the biggest challenges bow in front of their hmmm. And they are fully entitled to it. ”

“The number of our para athletes in the upcoming Games is three times more than in the previous editions. I have full faith in his ability. I believe your performance will also be better than last time. ”

He said that it is a matter of great pride and satisfaction that so far Para sportspersons have won three Khel Ratna, seven Padma Shri and 33 Arjuna Awards. Thakur said, “It is not easy at all, but your hard work, your zeal to win and your passion turned all these challenges into victories. I know when you go to Tokyo Olympics you will go with only one thought that India has to do better in the medal tally. ”

Thakur said that Prime Minister Narendra Modi did his best to encourage the sportspersons of the country before and during the Tokyo Olympics and he would do the same for para sportspersons. India’s best performance at the Paralympic Games was at the 2016 Rio Games in which it won two gold, one silver and one bronze medals.

Paralympic Committee of India (PCI) President Deepa Malik won the silver medal in Rio. “At the Tokyo 2020 Paralympics, we will see a record of medals as our players are at the peak of their form. ”

PCI General Secretary Gursharan Singh will be the team chief of the Indian team. Badminton will make its Paralympic debut in which seven Indian shuttlers will take part. Indian fans can watch the country’s para players in live action on Eurosports and DD Sports. PCI has given Paralympic live broadcast rights to Eurosport India.

The Indian contingent will start its campaign from August 27 in both men’s and women’s archery events.