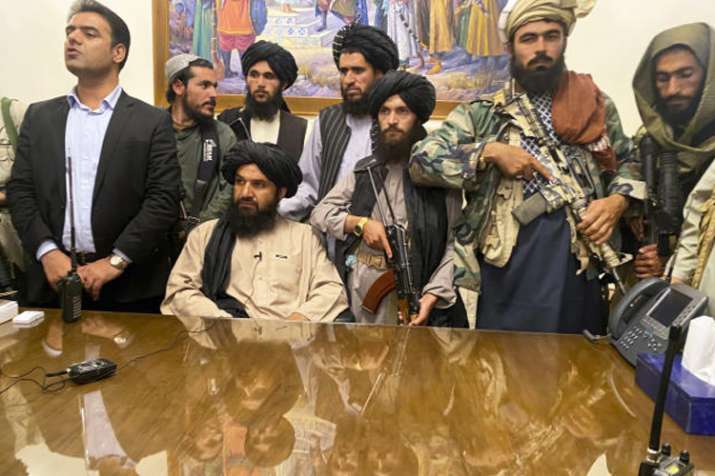 Kabul: Video footage aired on Al-Jazeera channel Taliban A large group of fighters is seen inside the Rashtrapati Bhavan in the capital Kabul. The Taliban is expected to announce its occupation of Afghanistan from Rashtrapati Bhavan and will re-name the country as the ‘Islamic Emirate of Afghanistan’. Within days of the withdrawal of US forces from Afghanistan after twenty years of fighting, almost the entire country has been again captured by the Taliban.

The United Nations Security Council (UNSC) will hold an emergency meeting on Monday on the situation in Afghanistan at the request of Estonia and Norway. Council diplomats said on Sunday that UN Secretary-General Antonio Guterres would brief council members on the latest situation following the Taliban’s capture of the capital, Kabul.

President Ashraf Ghani left the country after Taliban fighters knocked on Kabul on Sunday morning. At the same time, countrymen and foreigners are also trying to leave the war-torn country, although due to the closure of commercial flights from Kabul airport, these efforts of the people have got a setback. According to US Secretary of State Antony Blinken, the US is systematically evacuating the remaining staff from its embassy in Kabul. However, he did not play down the allegations of the US exiting in a hurry, saying that this is not a repeat of Vietnam.

“Our men are leaving the premises and heading to the airport,” Blinken said on ABC channel’s “The Week” on Sunday, confirming that US embassy staff would seek documents and other materials before vacating the premises. But he insisted that “this is being done very carefully and in a well-planned manner. All this is happening in the presence of American forces, who are ensuring our security there.

Military helicopters continued to fly from the compound on Sunday in order to evacuate the US embassy in Kabul. Citizens want to leave the country out of fear that the Taliban may re-enact a brutal regime that would end women’s rights. Citizens stood outside cash machines to withdraw their lifetime savings. At the same time, thousands of common people who left their homes in rural areas of the country for a more secure environment in Kabul were seen taking shelter in parks and open spaces throughout the city.

Abdullah Abdullah, the head of the Afghan National Reconciliation Council, confirmed that Ghani had left the country. Abdullah said, “The former President of Afghanistan has left the country, leaving Afghanistan in this difficult situation. May Allah hold them accountable.” Despite billions of dollars spent by the US and NATO to prepare security forces in Afghanistan over nearly two decades, the Taliban surprisingly captured almost all of Afghanistan in a week. Just days earlier, a US military assessment estimated it would take a month for the capital to come under Taliban pressure.

The fall of Kabul to Taliban control marks the final chapter of America’s longest war, which began after the September 11, 2001, terrorist attacks planned by al-Qaeda chief Osama bin Laden. Osama was then sheltered by the Taliban government. A US-led invasion toppled the Taliban from power. However, due to the Iraq war, America was distracted from this war. America has, for years, been trying to get out of the war.