Home Uncategorized After a long time, Modi and Advani were seen together, the Prime... 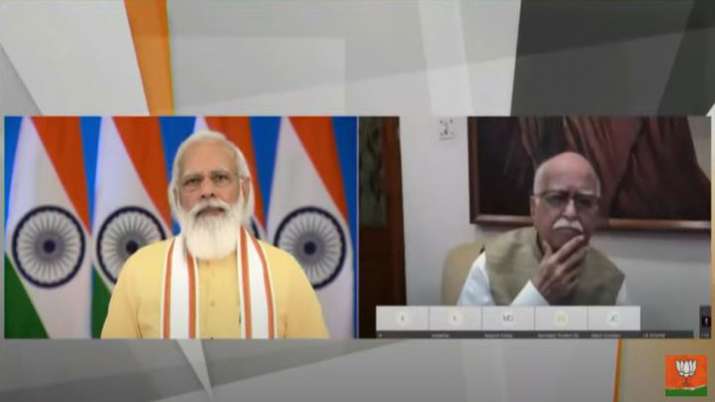 New Delhi: After a long time on Friday, Prime Minister Narendra Modi and the senior most leaders of the Bharatiya Janata Party (BJP) Lal Krishna Advani Appeared together, the occasion was the inauguration and foundation stone laying of projects related to Somnath temple. Prime Minister Modi laid the foundation stone and inaugurated the projects from Delhi through video conferencing and LK Advani from Delhi was also associated with this program through video conferencing.

When Prime Minister Narendra Modi started speaking in the program, he first saluted Lord Somnath and after that in the address, first of all, by taking the name of LK Advani, he honored him. After that Prime Minister Amit Shah, Chief Minister of Gujarat Vijay Rupani And took the names of other people involved in the program. About LK Advani, PM Modi said that he is revered by all of us.

Let us tell you that LK Advani is counted among the tall leaders of the country and his contribution in making the Bharatiya Janata Party the largest party of the country is considered, but due to old age, he has been away from active politics for a long time. . At present his age is 93 years. Due to his age, he also stays away from most public programs, but on Friday, he made his presence known through video conferencing in the program related to Somnath temple.

After inaugurating and laying the foundation stone of Somnath temple projects, PM Modi said in his address, I am connecting on this holy occasion through video conferencing but with my heart I feel myself at the feet of Lord Somnath. It is my good fortune that as the President of Somnath Temple Trust, I have got an opportunity to serve this holy place. Today I have the privilege of inaugurating Samudra Darshan Path, Somnath Exhibition Gallery and Juna Somnath Temple in a new form after renovation. Also today the foundation stone of Parvati Mata temple has also been laid, together with the holy month of Sawan, this is the accomplishment of the blessings of Lord Somnath for all of us.

Vivo Y21T All features revealed before launch, strong camera and battery are the specialty

Google may soon enter the foldable segment with a new ‘Pipit’...

Tabu’s tough cop avatar will once again be seen, shooting of...

It is better to have two different vaccines than the same...