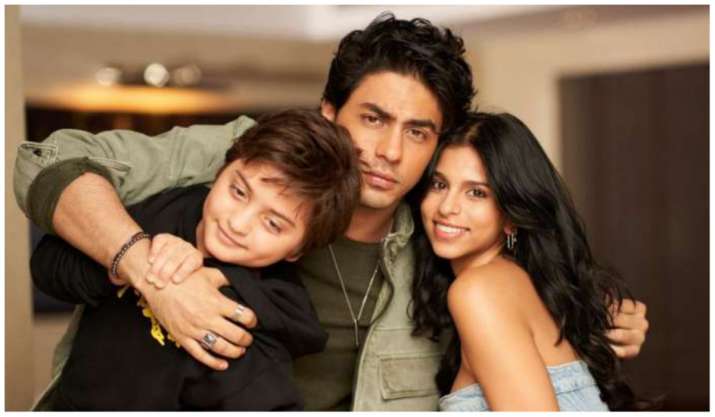 Aryan Khan shared love-filled pictures for his Instagram followers today. In the pictures shared by the elder son of Bollywood superstar Shah Rukh Khan, Suhana Khan and AbRam Khan are seen posing together with their elder brother Aryan. As soon as Aryan’s post surfaced on social media, celebs and fans showered praises by commenting.

Instagram Aryan has shared some pictures with his younger sister Suhana and younger brother AbRam. All three are looking very cute in the pictures. In the picture, Aryan is wearing an olive green T-shirt and jacket. On the other hand, Suhana looked very beautiful in a denim tube top and shorts and AbRam is wearing a black hoodie with blue jeans. While in one picture the three siblings are seen together, the other picture has only Aryan and AbRam. Aryan captioned the post, “Hat-trick.”

Shah Rukh was one of the first to comment on Aryan’s post. Replying to the post, the Bollywood star wrote, “Why don’t I have these pics!!!!!! Give them to me now.” Sussanne Khan commented, “Many love to all of you.” Since Aryan cropped Suhana in one of the pictures, Suhana commented on the elder brother’s post, writing, “Thanks for the crop. He made a heart emoji in another comment.

Shah Rukh is all set to make a comeback after the 2018 release Zero, with three of his films- Pathan, Jawan and Dunki set for release in 2023, all eyes are on Suhana Khan’s Bollywood debut with The Archies. Zoya Akhtar is directing the Netflix film and also stars Sridevi and Boney Kapoor’s daughter Khushi Kapoor and Amitabh Bachchan’s grandson Agastya Nanda.

- Advertisement -
Share
Facebook
Twitter
Pinterest
WhatsApp
Previous articleVaani Kapoor Birthday Spl: Vaani Kapoor has made her own identity in the industry
Next articleKRK removed ‘Khan’ surname from his name and added ‘Kumar’, know the reason
- Advertisement -