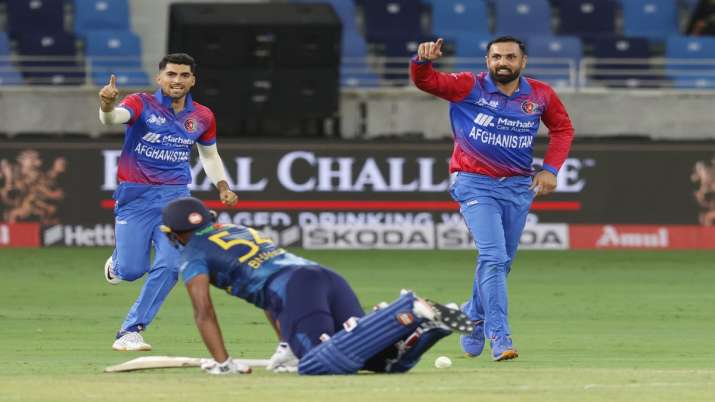 AFG vs SL, Asia Cup 2022: Afghanistan started the Asia Cup 2022 with a one-sided victory. Under the captaincy of Mohammad Nabi, Afghanistan team defeated Sri Lanka by eight wickets in the first match of the tournament. Afghanistan chased down Sri Lanka’s small target of 106 runs in just 10.1 overs in their 100th T20I match played at the Dubai International Stadium on Saturday.

Fazlhaq Farooqui and Rahmanullah Gurbaz were the heroes of victory for Afghanistan. Farooqui took three wickets for 11 runs, while Gurbaj played a brilliant innings of 40 runs in 18 balls. With this victory, Afghanistan’s team has reached the top of Group B.

Chasing Sri Lanka’s target of 106 runs, Afghanistan’s team got off to a fast and strong start by Rahmanullah Gurbaz and Hazratullah Zazai. Together they put on 83 runs in just 37 balls for the first wicket. In this, Gurbaj scored 40 runs in just 18 balls. He was close to his half-century but in the seventh over, Hasaranga bowled him and gave the first blow to Afghanistan.

🚨 RESULT | AfghanAtalan WIN BY 8 WICKETS@RGurbaz_21 (40) and @zazai_3 (37*) followed their incredible bowling effort with an electrifying batting display as they chased down the 106-run target with 9.5 overs to spare.

Gurbaj hit three fours and four sixes in his 18-ball knock before being dismissed. After this Ibrahim Zadran played some shots but he was run out after scoring 15 runs in 13 balls. However, after this, Jazai and Najibullah Zadran together did not allow any more wickets to fall and took the match with 59 balls to spare. Jazai remained unbeaten on 37 off 28 balls.

Fazlahak gave double blows to Sri Lanka in the first over

Earlier, Afghanistan captain Mohammad Nabi won the toss and invited Sri Lanka to bat first. Proving this decision of Nabi, Fazlhaq Farooqui sent Kusal Mendis and Charit Aslanka to the pavilion in the very first over. Before the Sri Lankan team could recover from these setbacks, in the very next over, Naveen-ul-Haq carried Pathum Nishanka.

Sri Lanka looked to be in trouble after losing three wickets for five runs, but Bhanuka Rajapaksa (38) and Danushka Gunatilaka (17) combined to advance the innings and put on a 44-run stand for the fourth wicket. Both looked to be in good form, with Mujeeb ur Rahman getting Danushka and Vanindu while Mohammad Nabi cheaply dismissed Dasun Shanaka to add to Sri Lanka’s troubles again.

On the other hand, Rajapaksa, despite being in good rhythm, returned to the pavilion after being run out in an unfortunate manner. At one time it seemed that the Sri Lankan team would not even touch the 100-run mark, but Chamika Karunaratne scored 31 runs in 38 balls to take the team’s score to 105.