New Delhi. The first match of the 5-Test series (IND vs ENG Test) between India and England will be played in Nottingham from August 4. Before this match, Team India has a big setback. Mayank Agarwal will miss the first Test due to a head injury. Shubman Gill, an opener of the team, has already been out of the series due to injury. Now who will play the first Test as Rohit Sharma’s opening partner, this question is the biggest. Meanwhile, former opener Wasim Jaffer has revealed the playing XI of Team India in the first Test by sharing a special message. For this, Jaffa has shared pictures of 11 different characters of films and web series.

While sharing the collage of 11 pictures, Jaffer wrote – Decode my playing XI for the first test, India vs England. The first photo is of Hrithik Roshan, which is from a scene in the film Kaho Naa… Pyaar Hai, in which Hrithik’s character’s name was Rohit, the second photo is of Shahrukh Khan. Shahrukh’s character has been named Rahul in many films. In such a situation, KL Rahul will play as Rohit’s opening partner.

At number three, Jaffa has placed a picture of WWE star Steve Austin. Cheteshwar Pujara is also called by the same name in county cricket. The fourth picture is of actor Cavit Setin working in Turkish TV series, who looks exactly like Kohli. The fifth photo is of John Abraham, in a film his character’s name was Ajju, which means it is for Ajinkya Rahane. 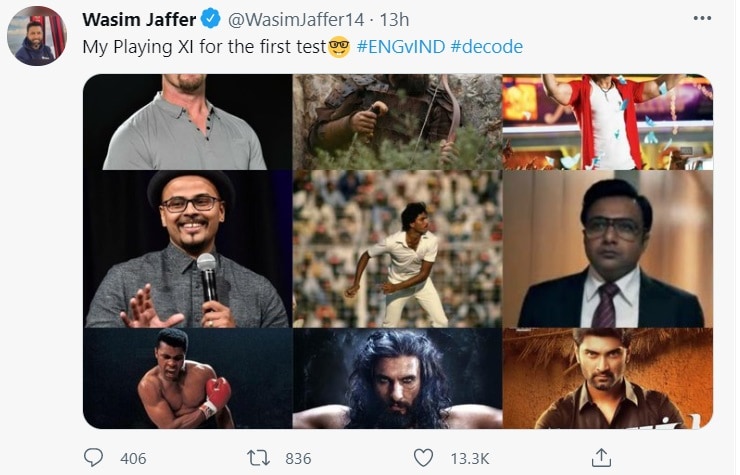 IND vs ENG: While sharing the collage of pictures, Wasim Jaffer has told the playing-11 of Team India for the first Test. (Wasim Jaffer Twitter)

Jaffer chose Pant as the wicket-keeper batsman
In the collage shared by Jaffer, the sixth picture is of stand-up comedian Saurabh Pant. This means Jaffer has chosen Rishabh Pant as the wicket-keeper batsman. The seventh picture is of Indian coach Ravi Shastri. That is, Ravindra Jadeja will be included as the seventh player in the playing-11. Jaffer has also kept Ashwin in his playing-11.

The ninth picture is of Mohammad Ali. This means either Mohammed Shami or Mohammad Siraj can get a chance in the playing-11. The tenth picture features Alauddin Khilji, played by Ranveer Singh in the film Padmavat. Who looks like fast bowler Ishant Sharma. Jasprit Bumrah is the 11th player.