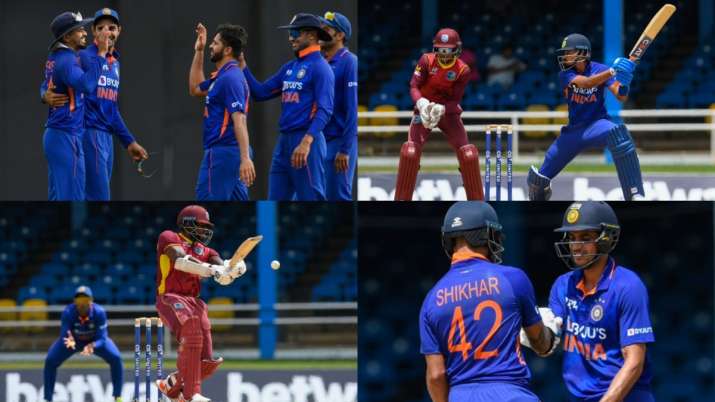 IND vs WI 1st ODI: The first ODI match of the series between India and West Indies was played at the Queen’s Park Oval ground in Port of Spain. Indian team won this exciting match by 3 runs. With this, Team India, which came under the captaincy of Shikhar Dhawan, also took a 1-0 lead. The next two matches of this series will be played on July 24 and July 27. In this match for India, three batsmen Shikhar Dhawan, Shubman Gill and Shreyas Iyer made fifty. After this Siraj, Shardul and Chahal took 2-2 wickets in their names.

What was the condition of the match?

West Indies captain Nicholas Pooran won the toss and decided to bowl first. Playing first, the Indian team gave the hosts a target of 309 runs to win. India scored 308 runs in the stipulated 50 overs for the loss of 7 wickets. For India, captain Shikhar Dhawan and young Shubman Gill shared a century partnership of 119 runs. Shubman Gill was run out on 64 and Dhawan missed out on his century by 3 runs. The captain played an innings of 97 runs in 99 balls.

.@yuzi_chahal picked two crucial wickets & was our top performer from the second innings of the first #WIvIND ODI. 👏 👏 #TeamIndia

A summary of his bowling performance 👇 pic.twitter.com/AfAhOPX4aE

After this Shreyas Iyer also hit a fifty and returned to the pavilion after scoring 54 runs. After this Suryakumar Yadav got out after scoring 13 and Sanju Samson scored 12 runs. Deepak Hooda scored 27 and Axar Patel scored 21 runs and played an important role in taking the score to 300. For West Indies, Shay Hope was dismissed early for 7 off Mohammed Siraj but Kyle Meyers (75) and Shamrah Brooks (46) put on 117 runs for the second wicket. Shardul Thakur dismissed both the set batsmen and eased India’s growing troubles.

After this, captain Nicholas Pooran (25) and Brendan King (54) added 51 runs for the fourth wicket but Siraj broke the pair as soon as he came. After this, Yuzvendra Chahal got the team 5th success by dismissing Rovman Powell. Then Akil Hossain (33 not out) joined the set king and took the score to 252. But the shrewd, playful and agile Chahal came once again and he dismissed Set King to restrict another partnership for 56 runs. This time Romario Shepherd (39 not out) kept the Indian team’s beats up till the last ball but could not take the team to victory.

In today’s ODI match, Sanju Samson, who was seen in the gloves behind the wicket, showed a good game. Of course, he could only score 12 runs with the bat. But he did a good job with the gloves. Especially in the last over, at one time West Indies needed 8 runs from 2 balls. But Siraj bowled such a bad ball on which 5 runs from wide seemed to be going. But Samson made such a brilliant dive behind the wicket that there was only one run of wide. Had we got 5 runs there, then perhaps India would have lost this match too.

- Advertisement -
Share
Facebook
Twitter
Pinterest
WhatsApp
Previous articleAsia Cup 2022 will be organized in UAE, BCCI President Sourav Ganguly gave the reason
Next articleENG vs SA: The entire team of South Africa was out for 83 runs
- Advertisement -