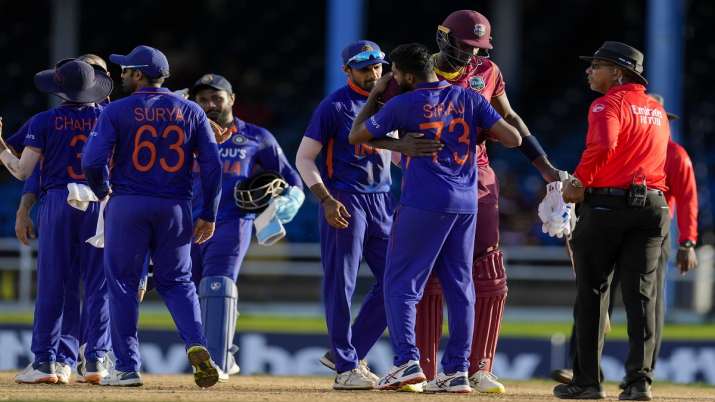 IND vs WI: India won the rain-affected third ODI against West Indies by 119 runs. For India, Shubman Gill was close to his century but was deprived of his first international century of his career by just two runs due to rain.

However, his unbeaten 98 and then a fine performance by the bowlers helped India thrash West Indies by 119 runs under the Duckworth-Lewis method in the rain-hit third and final ODI here to clean sweep the series 3-0. Under the leadership of Shikhar Dhawan, Team India managed to win the three-match ODI series against the West Indies for the first time at his home.

This was the 12th consecutive series win of the Indian team against the Caribbean team. India has now become the country to win the most consecutive bilateral ODI series against a single team.

In this case, he broke the record of 11 consecutive ODI series against Zimbabwe of Pakistan. West Indies have lost four of their last five bilateral ODI series 0-3. During this, India twice while Pakistan and Bangladesh once cleaned it.

In the match played in Port of Spain, India won the toss and elected to bat and scored 225 runs in 36 overs on the back of Shubman Gill’s unbeaten knock of 98 runs in a rain-hit match.

After this, due to rain interruption, the overs of the match was cut and West Indies were set a target of 257 runs in 35 overs for victory. In reply, the entire West Indies team was reduced to 137 runs in 26 overs. Yuzvendra Chahal took four wickets for India, while Shardul and Siraj got two wickets each.

West Indies then got the target of 257 runs in 35 overs under the Duckworth-Lewis method. Gill played an unbeaten 98 off 98 balls with the help of two sixes and seven fours. He shared 113 for the first wicket with captain Shikhar Dhawan (58) and 86 runs for the second wicket with Shreyas Iyer (44).

In response, the West Indies team was reduced to 137 runs in 26 overs in front of the sharp bowling of two wickets each from Yuzvendra Chahal (4 for 17), Mohammad Siraj and Shardul Thakur.

West Indies lost their last five wickets for just 18 runs. For the team, only Brendan King (42) and captain Nicholas Pooran (42) were able to bat while four of their batsmen failed to open the account. Chasing the target, West Indies had a poor start and they lost the wickets of Kyle Myers (00) and Shemar Brooks (00) in the second over itself, while the team’s account of runs was not even open.

After Siraj bowled Myers on his very first ball, Brooks was dismissed lbw on the third ball. Hope, after scoring 22 runs off 33 balls, missed Chahal’s attempt to play the ball forward and was stumped by wicketkeeper Sanju Samson. King tried to ease the pressure on the famous Krishna with three consecutive fours but was bowled after missing a straight delivery from Axar.

After this, Pooran took the front and hit fours and sixes in successive deliveries of Deepak Hooda. West Indies’ century of runs was completed in the 18th over. Keesi Carty, after batting very slow, scored five runs and played Thakur’s ball on the wickets. Pooran also then caught Dhawan off Krishna’s ball, which dealt a big blow to the hopes of West Indies’ victory.

Earlier, Dhawan won the toss and decided to bat first and along with Gill got the team off to a great start. Dhawan opened the account with a four off Jason Holder while Gill opened his innings with a four off Jaden Seals. Both the openers showed caution in the beginning and completed the half-century of the team’s runs in the 12th over.

Gill hit the first six of the innings off Hayden Walsh (2 for 57), while Dhawan also hit the spinner for a four. He completed his half-century in 62 balls with two runs off Keemo Paul. India’s century of runs was completed in the 20th over. This was Gill and Dhawan’s second century partnership in the series.

Gill also completed his half-century in 60 balls with a run off Seals. Dhawan, however, waved the ball in the air trying to play a big shot on Hayden Walsh’s googly and West Indies captain Nicholas Pooran made no mistake in the catch at mid-wicket.

He hit seven fours in his innings of 74 balls. Dhawan also became the 22nd batsman in the world to complete 1000 runs against the West Indies during this innings.

When the match resumed, Gill and Iyer hit sixes in Walsh’s first over itself. Gill hit two consecutive fours on Seals while Iyer saw the delivery of Holder and Akil Hossain (1 for 43) for the boundary. Iyer, however, returned to the pavilion by catching Paul at long on off Hussain.

He faced 34 balls and hit four fours and a six. Suryakumar Yadav became Walsh’s second victim after scoring eight runs in six balls. After some time it rained again and the Indian innings had to end there.