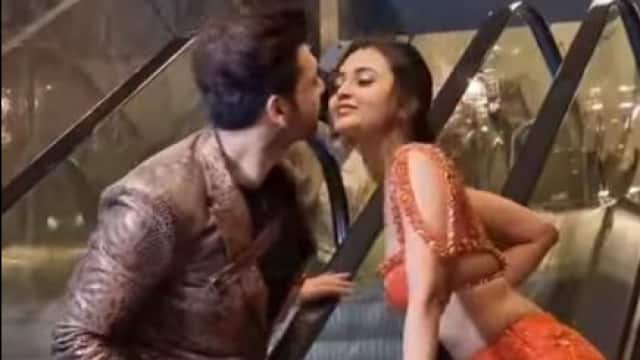 The new kissing video of Karan Kundrra and Tejashwi Prakash, who came in discussions regarding love affair from Bigg Boss 15 show, is going viral. In this video, both of them can be seen kissing on a moving elevator. Let us tell you that this is not the first time that such a video of this couple is going viral. Even before this, the couple were seen locking their lips on camera.

Kissing couple of tv industry
If Karan Kundrra and Tejashwi Prakash are given the tag of kissing couple of the industry, then it will not be wrong. Casual videos of this couple have been going viral in many parties. The fan following of this TV pair has increased after the exit of Bigg Boss. TV fans also like the romantic chemistry of this couple. Fans are also getting loving comments for the latest video of this couple going viral on social media. In this video, Tejashwi and Karan are seen doing liplock while coming opposite each other. A fan wrote for this video, Oops oops…. Another fan has called this couple the hottest couple.

Tejashwi is getting offers from Naagin Famous Dialogue
Tejashwi Prakash is being liked in the 6th season of ‘Naagin’. This show is collecting good TRP. The dialogues of the show are also becoming very viral. Tejaswi’s ‘Jab Walk Karate Toh…’ dialogue with Hinglish accent of the show is doing the rounds on Insta reels. Bollywood actress Jhanvi Kapoor has also acted on this famous dialogue. Apart from this, Tejashwi himself is getting offers from many brands to make ad and promotion videos for this dialogue. Tejaswi is posting these videos on Insta every day.

Let us tell you that the fan following of Tejashwi Prakash and Karan Kundra is not only in India but also abroad. Talking about Tejashwi’s Instagram followers, their number is more than 60 lakhs. Not only this, many fan pages of this couple have also been created on social media. Tejashwi and Karan Kundra come on top in the couple list of TV industry.