RSWS 2022: India Legends defeated Sri Lanka for the second consecutive time under the captaincy of Sachin 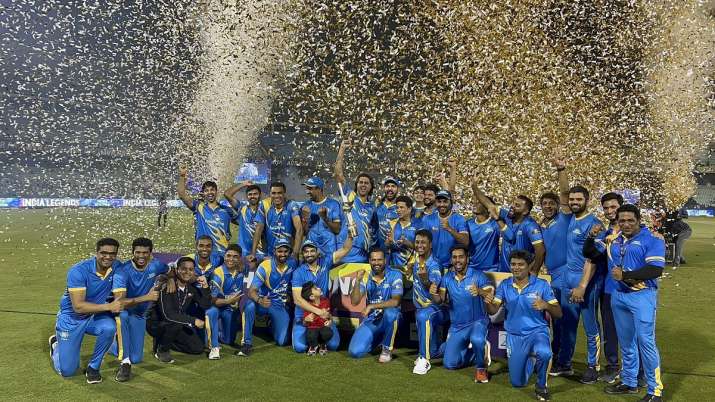 In this match played at the Shaheed Veer Narayan Singh International Stadium in Raipur, the team of India Legends scored 195 with the help of a century innings from Naman Ojha. In reply, Sri Lanka Legends were reduced to 162 runs in 18.5 overs.

What a great way to end the series, playing alongside the legends of all time was an amazing experience in itself, had an excellent time on the field after so long. Congratulations team #indialegends 🇮🇳 on sealing the game!! 💪❤️ #RoadSafetyWorldSeries2022 pic.twitter.com/ExYpDpW0hi

Talking about the match, Sri Lanka Legends, chasing the target of 196 runs from India Legends, did not have a good start and their opening pair of Sanath Jayasuriya and Dilshan Munaweera returned to the pavilion for 16 in the third over.

After this the Sri Lankan team could not recover from these setbacks and wickets kept falling at regular intervals. Captain Tillakaratne Dilshan (11) and Upul Tharanga (10) also could not last long and in a few moments, six Sri Lankan players returned to the pavilion on the score of 85.

Jayaratne and Udavatte saved the respect

Sri Lanka were at one point heading for a humiliating defeat but Ishan Jayaratne (51) and Mahela Udavatte (26) put on 63 runs in 32 balls for the seventh wicket to bring the team back into the match. Both scored fast but Vinay Kumar and Abhimanyu Mithun together dismissed both of them and then after cheaply handling the lower order, the entire Sri Lankan team was bundled out for 162.

Ishan Jayaratne top-scored with 51 runs for Sri Lanka Legends. He hit four fours and four sixes in his innings of 22 balls. At the same time, Vinay Kumar took the highest three wickets for India Legends.

Earlier, India Legends captain Sachin Tendulkar won the toss and decided to bat first. However, his decision did not prove to be right for the team in the beginning and returned to the pavilion without opening the account in the very first over. Suresh Raina also could not do anything amazing and scored two runs in four balls and went on in the third over. India Legends were in trouble after losing two consecutive wickets but Naman Ojha, who scored 90 runs in the semi-finals, continued his form here as well and completed his half-century.

Naman shared a 90-run partnership with Vinay Kumar for the third wicket and took the team’s score beyond 100. Vinay was dismissed in the 12th over after scoring 36 runs in 21 balls. After this Yuvraj Singh (19) and Irfan Pathan (11) returned to the pavilion after scoring runs.

However, Naman, who was at the other end, kept on scoring runs and completed his first century. Naman remained unbeaten on 108 off 71 balls. He hit 15 fours and two sixes during his innings. While Stuart Binny scored 8 runs in two balls to take the team’s score to 195. Nuwan Kulasekara took the highest three wickets for Sri Lanka.

- Advertisement -
Share
Facebook
Twitter
Pinterest
WhatsApp
Previous article
IND vs SA 2nd T20: All eyes will be on the performance of these 5 players in Guwahati T20
Next article
T20 World Cup 2022 Schedule: Know the complete schedule from qualifiers to Super-12, match timings
- Advertisement -