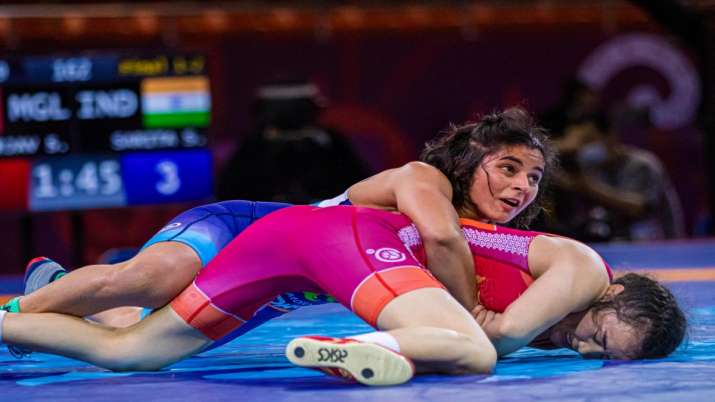 Indian wrestler Sarita Mor has wiped out every wrestler in the world to appear in the UWW Ranking Series competition Bolat Turlykhanov Cup. Sarita lost just two points while winning the 59kg category title. With this stellar performance, she also won the first gold medal of the 2022 season, which is India’s fifth gold medal in this competition.

Sarita came on the mat for three matches in the Turlykhanov Cup and won all three, including a technical lead victory over Azerbaijan’s Zhala Aliyeva. The Indian wrestler easily defeated all the other opponent wrestlers. After the win, Sarita said, “I agree that the level of competition was a bit low here compared to the Asian Championship. But I had seen the entry list of 57 and 59 kg category, there were better wrestlers in 59 kg so I participated in it. My target is to qualify for Paris Olympics, such a win gives confidence.

Indian wrestler Manisha clinched the gold medal in the 65kg final by registering a thumping 8-0 win over Azerbaijan’s Alice Manolova. This is Manisha’s first international gold medal at the senior level. Earlier, he won the bronze medal in the Asian Championship in April 2022.

Bipasha had to settle for a silver medal after losing 5-7 to home favorites Zhamila Bakbarzinova in the 72kg category of the Turlikhanov Cup. This is Bipasha’s first medal at the senior level, who has been participating in junior competitions till now.

Though Sushma Shokeen won the bronze medal in the 55kg category, her performance was impressive. She defeated Kazakhstan’s Ainur Ashimova in the play-offs within just two minutes.

In the men’s freestyle category, Mohit clinched the bronze medal in the 125kg by registering an 8-2 victory over Sardorbek Kholmatov. India’s medal tally in Turlikhanov Cup has gone up to 10, which includes gold medals from Mansi (57kg), Sakshi Malik (62kg), Divya Kakran (68kg).