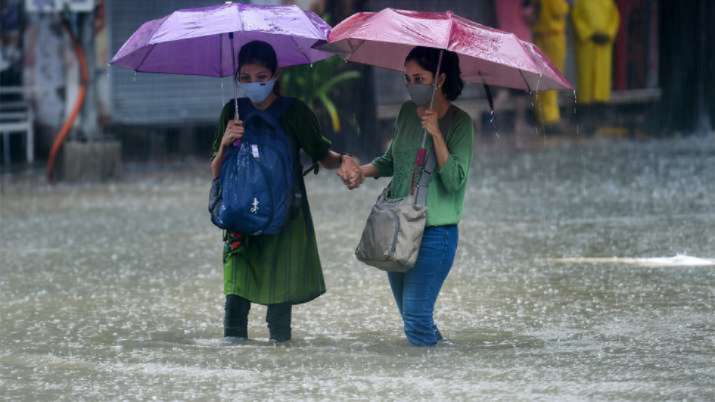 New Delhi: The Meteorological Department (IMD) has issued an orange alert for “heavy” to “very heavy” rain in six districts of Madhya Pradesh, while it said that four districts of Delhi have recorded heavy rains this monsoon. has gone. The Meteorological Department has also issued a yellow alert forecasting heavy rains in 17 districts of Madhya Pradesh. Officials said that so far two people have died in rain-related incidents in the state. PK Saha, senior meteorologist of IMD Bhopal office said that in view of the forecast of heavy to very heavy rains in the next 24 hours in six districts of the state, namely Rajgarh, Shajapur, Agar Malwa, Mandsaur, Guna and Ashoknagar, an orange alert was issued. Is.

He said that these six districts are expected to receive rainfall in the range of 64.5 mm to 204.4 mm. Saha said that apart from this, heavy rainfall in 17 districts of the state, Sheopur, Morena, Bhind, Neemuch, Gwalior, Shivpuri, Datia, Vidisha, Raisen, Sehore, Hoshangabad, Dhar, Dewas, Narsinghpur, Tikamgarh, Niwadi and Sagar in the next 24 hours. A yellow alert has been issued in view of the possibility of rain. He said that during this period, rainfall is expected in these 17 districts ranging from 64.5 mm to 115.5 mm.

Incessant heavy rains in eastern parts of Rajasthan have created a situation in many areas, to deal with which relief and rescue operations continued on Thursday. According to the Meteorological Department, many areas of Jhalawar, Baran, Tonk, Kota and Bundi recorded heavy to very heavy rains in the last 24 hours. Aklera in Jhalawar recorded the highest rainfall of 154 mm. According to the department, light to moderate rain was recorded in many other parts of the state during this period. State Disaster Response Force (SDRF) Commandant Pankaj Choudhary said that relief and rescue operations continued in the affected areas on Thursday as well. He said that 19 villagers were shifted to safe places in Chakeri village of Sawai Madhopur. A Meteorological Department spokesperson said that from Thursday morning till evening, 29.5 mm of rain was recorded in Sawai Madhopur, 17.2 mm in Kota, 8.4 mm in Jaipur. He said that there is a possibility of heavy rain at one or two places in Bharatpur, Dholpur and Karauli districts during the next 24 hours.

The Meteorological Department said that the maximum temperature in Delhi on Thursday was recorded at 35.3 degrees Celsius, which is one degree above the season’s average. The minimum temperature at Safdarjung Observatory was recorded at 26.5 degrees Celsius, which is considered normal for this time of the year. The Meteorological Department has forecast “generally cloudy sky with light rain” in the city on Friday. Delhi’s air quality also remained in the ‘satisfactory’ category. Data from the Central Pollution Control Board showed that the Air Quality Index (AQI) stood at 100 at 6.05 pm.

- Advertisement -
Share
Facebook
Twitter
Pinterest
WhatsApp
Previous article
Smartphone Tips: Do you know about this feature of smartphone? No one will be able to check even if it is unlocked
Next article
Bigg Boss OTT: Shamita Shetty to enter Karan Johar’s show amid Raj Kundra controversy?
- Advertisement -