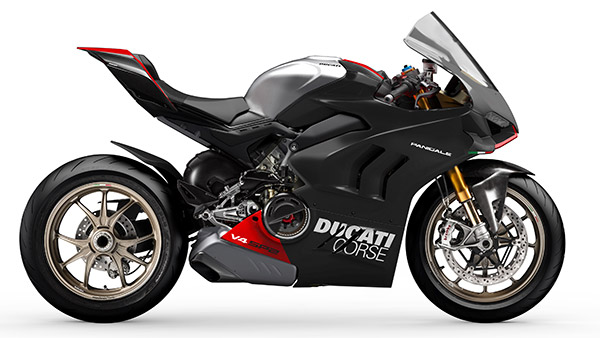 The new Ducati Panigale V4 gets updated with new graphics designed by Ducati Centro Style with a black logo, a double fabric saddle and a red tag on the black rims. It gets twin-pod headlights, muscular fuel tank, underbelly exhaust and single-sided swingarm. Overall, the overall design of the bike is similar to the 2021 Panigale V4. However, the thinner winglet provided in the new model can be easily seen.

The company claims that these winglets provide 27 kg of downforce to the bike at a speed of 300 km/h. On the other hand, the top-spec 2022 Ducati Panigale V4 SP2 gets the winter test livery which gets a matte carbon finish with red accents. Apart from this, the motorcycle also gets a brushed aluminum fuel tank.

In terms of hardware, the Ducati Panigale V4 gets 43 mm full-adjustable Showa BPF forks at the front and full-adjustable Sachs mono-shock at the rear. While the more premium S and SP2 variants get electronically adjustable Ohlins-sourced front forks and a rear mono-shock.

Apart from the engine changes, Ducati’s engineers have also increased the first and second gears by 11.6 percent and 5.6 percent respectively. This allows the newly calibrated Ducati Quick Shifter (DQS) to work even better. To further benefit from the increased peak horsepower, the sixth gear has also been lengthened to deliver 5 km/h higher top speed than the 2021 Ducati Panigale V4 motorcycle.