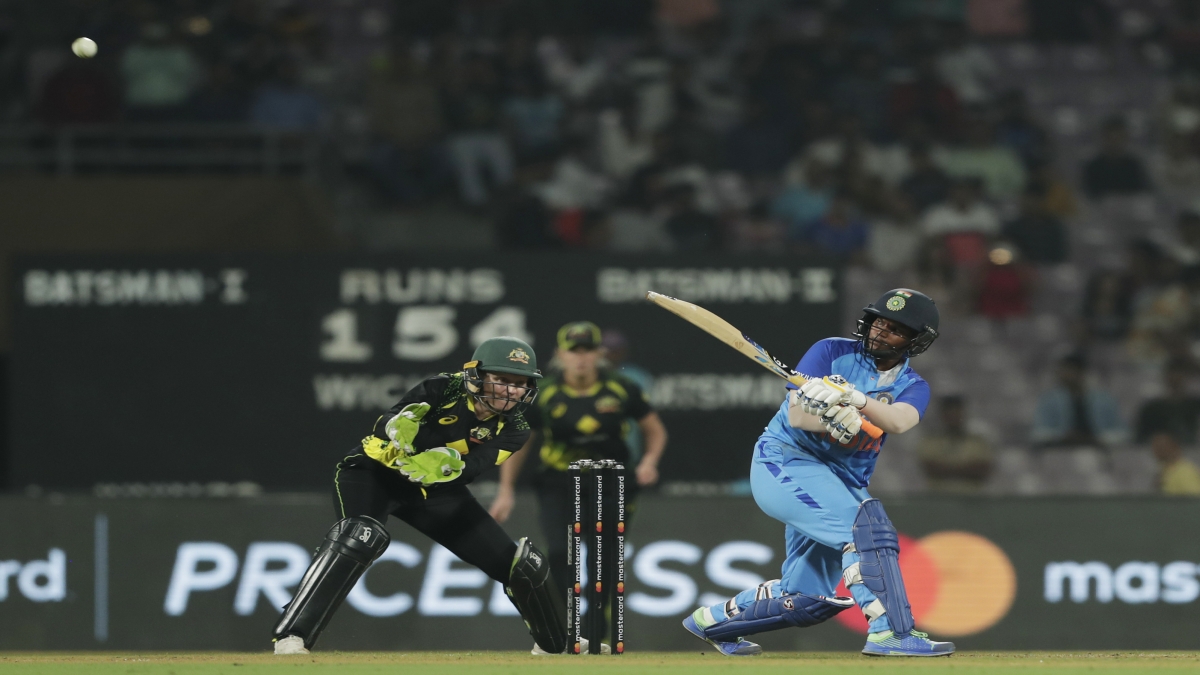 INDW vs AUSW: The first T20 match of the series between India and Australia was played at the DY Patil Stadium in Mumbai. In this match, Australia won the toss and decided to field first, in response India scored 172 runs for 5 wickets while batting first. But the Australian team achieved this target by losing just 1 wicket in just 18.1 overs. Team India is now 1-0 behind in the 3-match series.

Australia beat India by nine wickets with 11 balls to spare in the first match of the five-match T20 International series on the basis of opening batsman Beth Mooney’s unbeaten 89 off 57 balls. Batting first, India scored 172 runs for five wickets. Australia won the match by scoring 173 runs for one wicket in 18.1 overs without any trouble.

Earlier, on the basis of aggressive 36-36 runs by all-rounder Deepti Sharma and wicketkeeper Richa Ghosh, India scored 172 runs for five wickets. Deepti hit 8 fours in her 15-ball unbeaten innings, including four consecutive fours in the last over of Megan Shutt. Richa shared a quick 56-run partnership for the fifth wicket with Devika Vaidya besides hitting five fours and two sixes in her 20-ball innings. Devika remained unbeaten on 25 off 24 balls.

Chasing a big target, Australia went on the offensive after batting cautiously in the early overs. In the third over of the match, Radha Yadav gave life by leaving a difficult catch of Mooni on the ball of Renuka Singh. In the fourth over, Healy and Mooney hit boundaries against left-arm medium pacer Anjali Saravani, who was making her bowling debut.

Mooney then hit a hat-trick four against Renuka in the fifth over. Australia consolidated their position in the powerplay by scoring 47 runs without loss. Healy hit the first and second sixes of the innings against Devika Vaidya in the seventh over and Radha Yadav in the eighth over.

Devika dismissed Healy in the 9th over to break her 73-run partnership with Mooney. Even after the fall of the wicket, Australia’s run rate was not affected much and Mooney along with Talia McGrath scored easily. In both, collect runs according to your wish in every corner of the ground. Captain Harmanpreet was constantly changing the bowling but neither the spinners were effective nor the fast bowlers were able to leave any impact.

Australia completed their century in the 13th over of the innings with a four off McGagh against Deepti. In the next over, Mooney completed his half-century by running for two runs off Radha’s ball. He decided the course of the match by hitting four fours against Devika who came to bowl in the 15th over. McGagh hit Meghna Singh for a six and a four in the 17th over which Mooney also sent twice across the boundary line in this over.

On being invited to bat first, Shefali Verma hit a four and a six in the first over of the innings. Experienced Smriti Mandhana (28 off 22 balls) hit Australia debutant Kim Garth for a four. In the next over, Shafali hit Ellyse Parry for a six on the off side. Parry, however, dismissed Shefali to end her blistering 21 off 10 balls. Smriti hit four boundaries against Garth in the next over to take India to 45 for one after four overs.

- Advertisement -
Share
Facebook
Twitter
Pinterest
WhatsApp
Previous article
IND vs BAN 3rd ODIs: This will be the playing 11 of India and Bangladesh in the third ODI, know the pitch report and weather update
Next article
INDW vs AUSW 2nd T20: Team India’s big win over Australia, the breath stopped in the super over
- Advertisement -