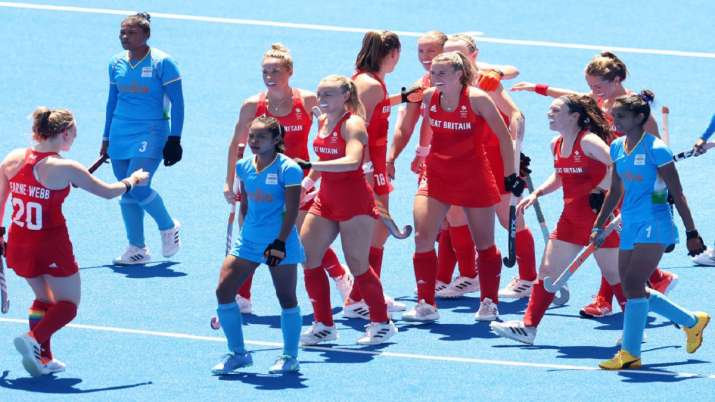 Tokyo| India’s women’s hockey team suffered a 3-4 defeat at the hands of Great Britain in the bronze medal match played on Friday. The British team, which won gold at the 2016 Rio Olympics, has won a bronze medal for the third time in its eighth Olympics. There were many ups and downs in this match held on the Oi Hockey Stadium North Pitch. India, playing their third Olympics, were once trailing 0-2 but scored three goals in a row to take a 3-2 lead at half-twenty. But after this England scored two consecutive goals and scored the match in their favor.

Elena Reyer (16th), Sarah Robertson (24th), Holly Pierre (35th) and Grace Balsdon (48th) scored for England while Gurjit Kaur (25th, 26th) scored two goals for India while Vandana Kataria (29th) scored. scored a goal. Britain got 12 penalty corners, three of which they converted into goals. India got a total of 8 penalty corners, out of which two were goals.

Britain took a 1-0 lead in the second quarter, scoring within 60 seconds after the first quarter was empty. The first goal of the match for him was scored by Elena Reyer. It was a field goal.

The goal seemed to have invigorated the British team as they scored another goal in the 24th minute to take a 2–0 lead. This goal was scored by Sarah Robertson. It was also a field goal. Before the British could enter with a half-time lead, India took a 3-2 lead after scoring three successive goals.

Gurjeet Kaur opened India’s account in the 25th minute on a penalty corner and then a minute later scored another goal to make the score 2-2. India made a spectacular comeback with the help of goals scored by Gurjeet from the penalty corner.

Now the Indian team was filled with enthusiasm. He started creating chances and in the same sequence he got a resounding breakthrough in the 29th minute. Vandana Kataria put India 3-2 ahead through a field goal.

India were leading 3-2 at half time. Five minutes after the half-time whistle, Britain scored 3–3 on goal. This goal was scored by captain Holly Pierre. The Indian team could not score any goal in the third quarter.

The thrill of the match was on stage when the fourth and final quarter began. Both the teams had the last 15 minutes to get the medal. In this sequence, however, Britain got success. In the 48th minute, he scored a penalty corner to take a 4-3 lead. This goal was scored by Grace Balsdon.

This was India’s third Olympics. She qualified for the Rio Olympics (2016), 36 years after Moscow (1980). India finished fourth in the final but only six teams took part in the Olympics that year due to the boycott.

India then qualified for the 2016 Rio Olympics but finished last in the 12-team tournament. India had got only one draw in five matches at the pool level.

- Advertisement -
Share
Facebook
Twitter
Pinterest
WhatsApp
Previous article
Cricket Matches Today: Day 3 of the first Test between India and England, know the schedule of today’s matches
Next article
IND vs ENG: Team India’s batting is the worst under the captaincy of Virat Kohli, runs are not being scored
- Advertisement -