Why is there a controversy over the saffron vs Meena flag at Amagarh Fort in Jaipur, what is the whole matter, what has happened so far? 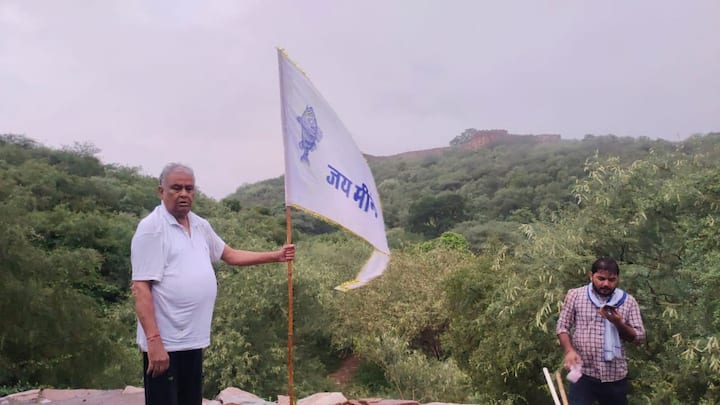 Amagarh, built on a hill on the Jaipur-Delhi highway, has been embroiled in the Bhagwa vs. Meena dispute for the past few days. There is a very small fortified ruin where there is also a place of worship, due to which there is a turmoil. The basic reason behind this dispute is that the public representatives of the state are telling this place to be under the possession of Meena Samaj for hundreds of years.

This whole fight started a fortnight ago when Ramkesh Meena, an independent MLA, along with his supporters went to Amagarh and tore the saffron flag installed there. When the Hindu organizations were ready to oppose this, the administration banned the people from going there.

After this, BJP’s Rajya Sabha MP Kirori Lal Meena announced on Saturday that he would go to Amagad on August 1. On the other hand Ramkesh Meena also talked about going to Amagadh.

The police and the administration felt that there could be a situation of confrontation between the supporters of Kirori and Ramkesh, so a large number of soldiers were deployed in this area as a precaution. But, MP Dr. Kirori Meena reached Amagad with his supporters on the morning of August 1 and there he hoisted the white flag of Meena Samaj.

Dr. Kirori and his supporters were arrested by the police and taken to the Vidyadhar Nagar police station in Jaipur. Many BJP leaders became active on social media in support of Kirori and started opposing his arrest.

Hundreds of Kirori’s supporters gathered at the police station demanding his release and after seven hours the police released Dr. Kirori. After this, Kirori along with his supporters sat on a dharna at Gandhi Circle on Jawahar Lal Nehru Marg in Jaipur. After some time the dharna of Dr. Kirori and his supporters ended.

Earlier on June 4, the idols of Shiva temple built in Amagadh were vandalized. On this, local leaders of Vishwa Hindu Parishad had lodged a case at Transport Nagar police station in Jaipur. The police had arrested six people in this case.

After this, on June 14, the head of Galtapeeth again got the idols consecrated. Then, with the consent, a saffron flag was installed there, which was torn down by MLA Ramkesh Meena along with his supporters.

Overall, this controversy of saffron versus Meena created unnecessary tension in Amagadh and its surrounding areas of Jaipur. After hoisting the flag of Meena Samaj, Kirori went to Delhi and now the administration is ready about Amagad so that no dispute should arise again.