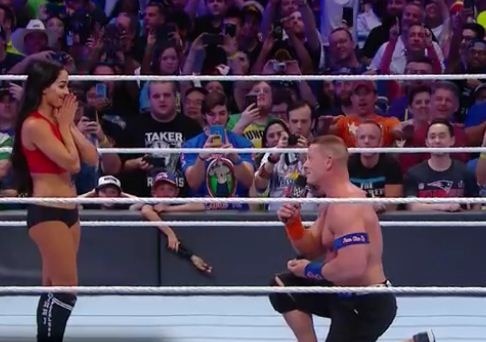 AJ Styles: The episode of WWE Raw on Monday was full of excitement. Superstar John Cena also appeared in Raw. Actually, before the start of the show, the backstage segment of John Cena’s arena entry was seen. During this, the rest of the superstars welcomed John Cena, after which John Cena thanked everyone. Apart from John Cena, Rey Mysterio, AJ Styles, Riddle, The Miz, Shinsuke Nakamura and Veer Mahaan in this match. Including there were many big superstars.

After the elimination in the first match, Shanky was thrown out of the match by Jinder. Actually, Jinder Mahal did it with Shanky. At the same time, Dolph Ziggler and The Miz together took out Rey Mysterio. Ricochet eliminated the T-bar, then Nakamura kicked Ziggler out of the match but was then thrown out by Riddle. Apart from this, AJ Styles eliminated Ricochet. However, Miz was out of the ring due to injury, while only AJ Styles and Riddle were left in the ring.

At the same time, The Miz was called for an interview in the ring. During this, The Miz was told that Logan Paul is preparing to return. Also further said that Logan Paul can do bad to The Miz. After which The Miz said that he is not afraid of Logan Paul. The Miz later talked about AJ Styles, during which The Miz insulted AJ Styles. AJ Styles attacked The Miz after entering the ring. However, in this match, AJ Styles won by countout.