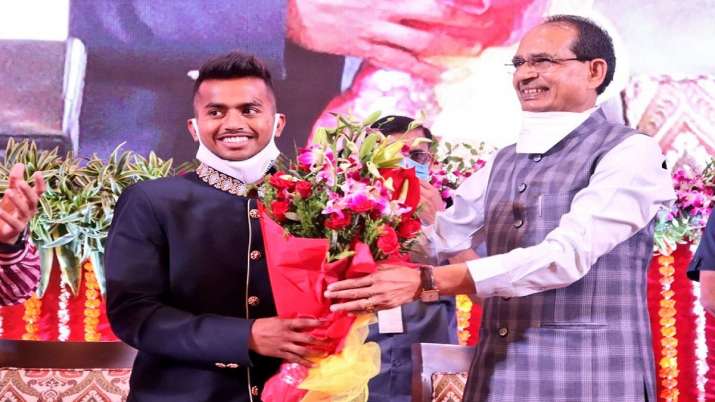 Bhopal. Madhya Pradesh Chief Minister Shivraj Singh Chouhan on Thursday honored Vivek Sagar, a member of the Indian men’s hockey team that won bronze medal in Tokyo Olympics, with a prize money of Rs one crore and also appointed him as Deputy Superintendent of Police (DSP). The Indian men’s hockey team won the bronze medal at the Tokyo Olympic Games, ending the 41-year long wait for an Olympic medal. Vivek was part of this team. After felicitating Vivek Sagar with an amount of Rs 1 crore at Minto Hall here, Chouhan said, “Vivek is also the DSP of Madhya Pradesh from today.”

He also announced that wherever Vivek’s family would like in Madhya Pradesh, a pucca house would be constructed and given to them. The Chief Minister said, “Indian hockey team has not only won bronze medal in Tokyo Olympics, but it is the renaissance of Indian hockey.” Vivek is a resident of Chandon Pipariya village in Hoshangabad district of Madhya Pradesh. Chouhan said that by winning this hockey medal, Vivek has made Chandon Pipariya village, Itarsi, Madhya Pradesh and the entire country proud. He said that Vivek’s age is only 21 years now. Surely he will one day be a part of the gold medal winning team. Many congratulations and best wishes to them.